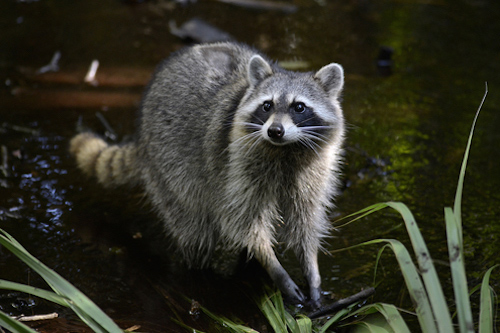 At Varment Guard, we have a team of experts with the knowledge and tools needed for proper raccoon control. The best raccoon control is obtained through trapping and exclusion.

Our humane raccoon control services will safely and effectively remove all raccoons from your home or business.

HOW TO GET RID OF RACCOONS

Trapping is the preferred method of removal of raccoons. Most commonly by the use of live-catch wire cage traps. These traps are baited with a variety of scents raccoons find irresistible.

Raccoons should be prevented from entering structures by exclusion. Exclusion is a method of preventing animals from entering a structure by installing preventative materials to restrict access points.

To learn more about how to keep raccoons out of unwanted areas, visit our Raccoon Prevention and Exclusion page.

Although raccoons can be easily scared away much of the time, when cornered they can pose a danger to humans and domestic pets. Raccoons, like skunks, can be destructive to lawns and other grounds landscaped in cultured turfgrass due to a propensity for ″grubbing″ behavior, as they dig for scarab beetle larvae on which to feed. Multiple, large areas of sod in a lawn can be torn up overnight as a result of raccoon grubbing. Raccoons often gain access into attics, basements, and crawlspaces by forcing open loose or broken vent covers, louvers, windows and carpentry. Raccoons readily invade attics or enter uncapped chimney flues often as a place to birth and wean their litters of pups. Since raccoons often are infested with ticks and various fleas, including cat fleas, human occupants and their companion animals are readily infested secondarily by the introduction of these ectoparasites via fireplace hearths and attic entrances. Raccoon feces accumulate in the above-mentioned areas, thereby giving rise to odor and secondary pest problems, as well as serving as a potential source of raccoon roundworm infection. Raccoons have been implicated in several other infectious diseases transmissible to humans including leptospirosis, Chagas′ disease, tularemia and, most notably, rabies. Besides invading human dwellings and commercial buildings, raccoons also take up residence in barns, stables, and various outbuildings.

We can rid you of raccoon problems safely and efficiently!

How Can I Keep Raccoons Out of My Garage?

Four steps you can take to keep raccoons from sneaking into your garage include securing your dumpster, keeping the garage door closed, clearing clutter around your home, and using ammonia. Keep reading to learn how to keep these pesky pests out of your space!

How Can I Keep Raccoons Out of My Garbage?

Four ways you can raccoon-proof your garbage this winter include tying down your garbage can lids, keeping your garage door closed, sealing your trash bags, and rinsing out disposables before throwing them away. Learn more!

How Can I Prevent Raccoons this Spring?

Keep all garbage you take outside in sealed plastic bags; make sure they don’t leak or smell and tie down the lids of your garbage cans with bungee cords. Clean out your dumpster about once every two months in order to prevent smells or residue. Install strong wire mesh screens under your porch to keep them out. Learn more!

What Do Raccoons Do in Winter?

Raccoons spend most of the winter in their dens. However, they do emerge every few weeks to forage for food and drink water. Raccoons are opportunistic foragers; they want food that is easy to find… and lots of it! Learn more about what raccoons do in the winter!