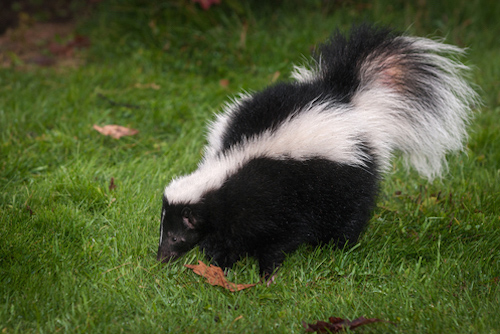 As with many other vertebrate pests, the best solution to skunk problems beneath buildings is to screen or block them out. Such exclusion is essential for all entrances or openings in the foundations of homes and outbuildings. Spaces beneath porches, stairs, and mobile homes should be closed off to exclude skunks.

To learn more about our animal removal process, take a look at our Wildlife Removal & Trapping service options.

Once skunks have made their home beneath a building, the problem is a little more difficult. One must be sure the animal has left before closing-off the entrance. That can sometimes be accomplished by sprinkling a smooth layer of flour or non-toxic tracking powder on the ground at the suspected entrance to form a tracking patch and then examining the area for skunk tracks soon after dark. When tracks lead out of the entrance, the opening usually can then be safely closed off. If the number of skunks present is unknown, the tracking patch can be supplemented by hanging a section of 1/2 inch mesh hardware cloth over the opening, hinged at the top and left loose on the other three sides. It must be larger than the opening, so that it cannot swing inward. The skunks will push it open to leave but ordinarily cannot re-enter. Specially-constructed one-way doors that better prevent re-entry are sometimes needed to outsmart a clever skunk.

Buried wire fencing can prevent skunks from excavating or re-entering beneath porches, shallow decks and slab foundations. A skirting or band of 1/2 inch mesh hardware cloth must be fastened tightly to the above ground structure of the porch, deck or foundation. The lower portion of the fence should extend 12 to 18 inches beneath the ground and then 6 inches outward horizontally, below grade. The resulting barrier will discourage skunks and other burrowing animals (e.g., groundhogs) from digging beneath it.

The use of naphthalene crystals (mothballs) and rags soaked with household ammonia to drive skunks from occupied spaces beneath the porches and buildings is often not effective and is not a method recommended by Varment Guard. Also, both of these methods carry the risk of odor penetration into the living and workspaces of the building being treated.

Lawn damage due to skunk grubbing behavior may be alleviated by scattering MilorganiteTM over the lawn.

Skunk dens found away from buildings can be targeted using gas cartridges. The same carbon dioxide and sulfur-generating gas cartridges used for groundhogs are also effective on skunks when used in the same manner. However, for safety reasons the use of asphyxicants or fumigants should not be used in skunk dens that adjoin or undermine the foundation of occupied buildings.

Carbon monoxide (CO) is used by Varment Guard to displace the oxygen in an airtight chamber designed to accommodate one or more live-catch traps. This method asphyxiates the captured animal while still in the trap. Because of the potential of spreading rabies and distemper, relocating and releasing trapped skunks is not advisable and is illegal in some states.