Do you have a mole problem in or around your property? Contact us today to schedule a mole removal service! 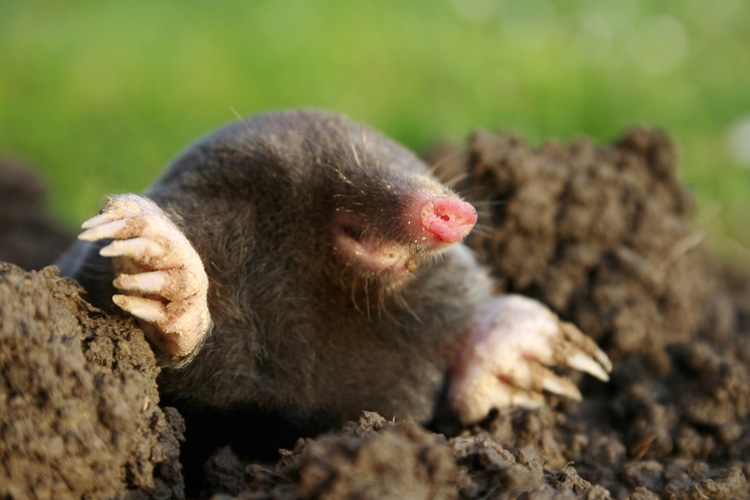 Moles are small mammals specialized for life underground; they are insectivores and are related to shrews (not rodents). Their small eyes and ear openings are concealed in fur, the paddle-like forefeet are large and have pronounced claws for digging, and their hind feet are small and narrow with slender, sharp claws.

Mole fur is short, soft, and velvety. When brushed, the fur offers no resistance in either direction—this allows the moles to travel both forward and backward through the soil.

What Kind of Moles are There?

The two most common types of moles in Ohio, Indiana, and much of the Varment Guard service area are the eastern mole and the star-nosed mole. 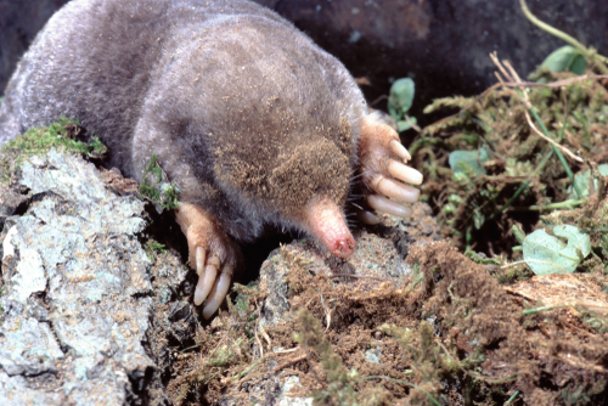 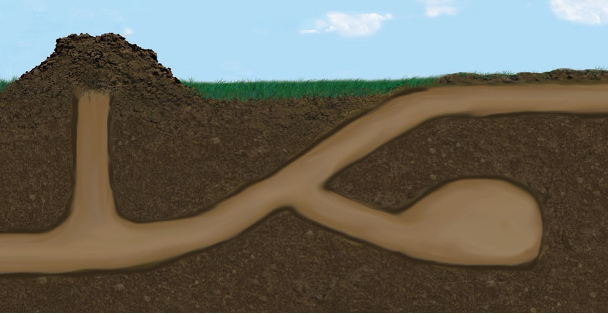 Moles have only a few predators because of their secluded life underground—spring floods are one of the greatest dangers moles face. These mammals may live for three to four years.

What do moles eat?

A mole’s diet consists mainly of grubs, beetles, beetle larvae, and earthworms. Loose and moist soil is the best place for moles to find their food of choice; this preference accounts for the animal’s attraction to lawns, golf courses, and fields.

Moles expend a tremendous amount of energy plowing through soil, which means they need to consume a correspondingly large amount of food. In fact, moles eat 70 to 100 percent of their weight every day!

Due to their food requirements, moles need to cover a larger area than most other animals that live underground. Three to five moles per acre are considered a high population!

Moles do not hibernate. Although, their activity levels do change from season to season. They are busiest when they are finding and storing food during rainy periods in summer.

What Kind of Damage Do Moles Cause?

Mole damage that is most objectionable to homeowners includes mole mounds, molehills, and mole tunnels.

Where Do Moles Cause Damage?

As a result of their digging and tunneling in search of insects and earthworms, moles are notorious for the damage they cause the following environments: 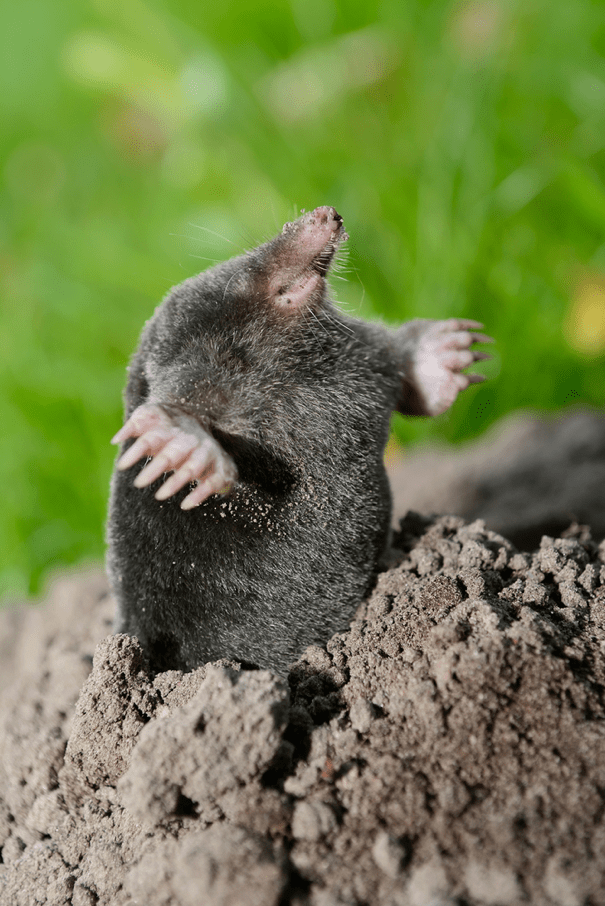 Although moles destroy the yard, they do play a beneficial role in the management of soil and the control of undesirable grubs and insects. This is why we ensure that our mole removal services are humane. Safety is always top of mind.

Mole tunnels on your property can be an annoying and expensive problem for any home or business owner. However, this problem can be easily solved with the help of Varment Guard. We offer live mole removal from homes, lawn mole removal, and much more. Mole control services we offer, include:

Spear traps and scissors traps both works well for eliminating moles from a property, if properly set and maintained. Both traps are used by Varment Guard technicians and are designed to be anchored in the main (frequented) surface runways of moles.

Traps are marked with fluorescent flags for ease in locating them and helping people on the premises avoid them. The traps are continually moved following mole activity and set on the newest runs for better success. Traps are typically checked 3 times per week.

A metabolic toxicant, Talprid, can be an effective mole control method. This worm-mimic product is placed in the main surface runs of moles.

It is marked and monitored in lawns and landscaping, to ensure efficiency of the baiting program. Talprid is often used by Varment Guard technicians during trapping programs.

The Burrow RX machine can be used to place carbon monoxide in mole tunnels. It does this by running a small engine and the exhaust is directed into the mole runs with a hose.

All surfaces of the mole tunnels are sealed with dirt, keeping the gasses underground. Once the machine is shut off the gasses dissipate quickly with no harm to pets or people above ground. This is done in conjunction with trapping service to help assure no moles are left behind.

To learn more about wildlife and mole removal, take a look at our  Wildlife Removal & Trapping page.

Where Does Varment Guard Offer Mole Control and Removal Services?

Whether you’re looking for mole control and removal for your home or your business, Varment Guard can help! We have locations all over the country to make sure your property stays wildlife-free.

In need of mole removal in Columbus, Ohio? Looking for mole control in Minneapolis, Minnesota? We’ve got you covered. Varment Guard offers expert mole services to the following areas: 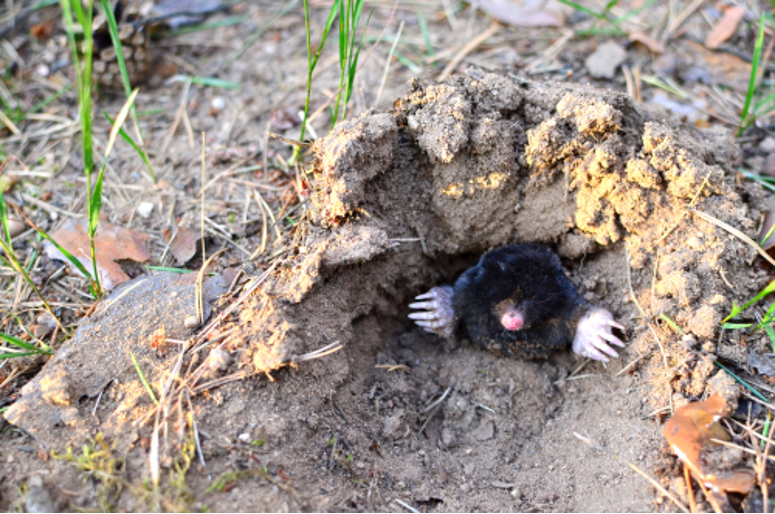 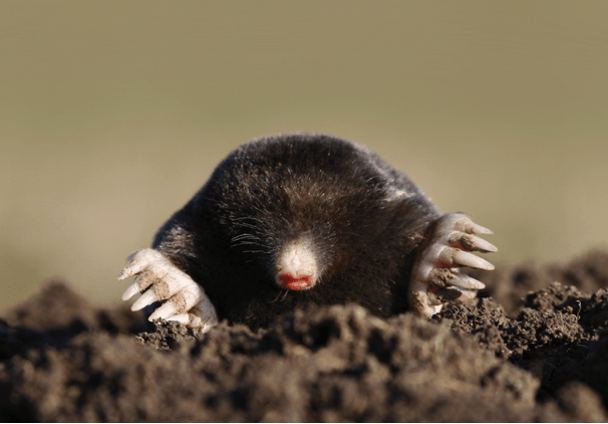 At Varment Guard, we offer professional mole removal from yards, golf courses, gardens, and more. Our mole removal service technicians are expert mole trappers and can get your lawn or property free of problem wildlife quickly, safely, and humanely.

If you are tired of your yard, lawn, or property being full of molehills, trails, and tunnels, contact Varment Guard right away!

We can rid you of moles safely and efficiently!