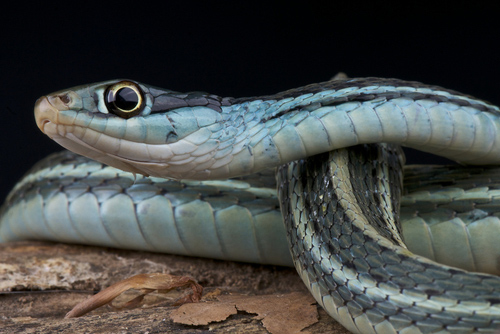 Snakes are long, legless reptiles that move by slithering along the ground. Their appearance can vary a lot depending on their specific species, with colors ranging from green to red, yellow, blue, black, or brown. Their lengths can be as short as ten centimeters to as long as dozens of feet. If you’re on this page, don’t worry, you won’t find any prehistoric titanoboas in your backyard – the most common pest snakes, like garter, ribbon, and corn snakes – are nothing to fear.

Take a look below to learn more about the most common pest snake varieties and how we can help you keep them away from your property.

Structural and foundation gaps should be caulked or sealed to prevent snakes from entering. Crawlspace vents should be screened.

Snakes that have entered or escaped in a residence may be difficult to find. Snakes can be captured inside or under dwellings, in garages or warehouses and along buildings by placing several sticky traps. These traps are covered to prevent the elements from deteriorating the and reduce non target catches. Scent attractant can be applied to the traps. Once snakes are caught, they are humanely removed from the sticky trap with the use of vegetable oil and then released back into a suitable habitat far away from where captured. Water-style traps are used in circumstances where water snakes are present.

At the conclusion of a trapping program, Varment Guard offers a snake repellent granular to be placed around the perimeter of the area where activity was present.

Varment Guard technicians are properly trained to handle and remove snakes by hand. This typically occurs if the snake is found inside the structure or home and is in an area where it can be reached. Snakes can be removed by hand or with a snake stick.

Upper body background color brown, gray or black; some species with alternating dorsal and side blotches, diamonds or crossbands; underside white to yellow with variable markings.

Background color brown to black, marked with squarish dark blotches (sometimes indistinct) along the back; 2 or 3 series of small dark blotches on the sides; underside dark and heavily blotched; tail short, stout and ringed with dark brown and background color

We can get rid your of snake problems safely and efficiently!

Almost any snake that finds its way indoors or is discovered in a home garden may, unfortunately, invoke mild hysteria in persons who have no appreciation for snakes. Beyond the connection between snakes (serpents) and Satan (evil) described in the book of Genesis, much fear and disdain for snakes stems from the possibility of encountering one or more of the several venomous or aggressive species that are native to this continent; although only 16% of the species in the United States can be considered dangerous.

Furthermore, the general public has difficulty in identifying snakes correctly. Two families of snakes are responsible for most of the fear expressed by the general public. Rattlesnakes, water moccasins (cottonmouths) and copperheads are the North American representative pit vipers (family Crotalidae, a.k.a. Viperidae),which possess heat sensors located in visible loreal (facial) pits between the nostril and eye on each side of the head. These sense organs mainly enable them to seek out and capture warm-bodied prey, even in darkness. It can be dangerous to pick up a recently killed rattlesnake or the head of a decapitated rattlesnake, for example, because the warmth of the hand may cause the snake’s mouth to open reflexively, with the extendable, hypodermic-like fangs ready to inject venom, if the hand is in position to be bitten. The eastern coral snake is the sole representative of the family Elaphidae – the only other family of venomous snakes found in the U.S. Coral snakes are not found in Ohio, except in captivity.

Practically all other snakes commonly seen in the United States belong to the largest family, Colubridae. This group includes bull snakes, various racers, gopher snakes, king snakes, garter, ribbon, green and water snakes, coach whip snake, corn, rat and fox snakes, to name some of the more common species. Nevertheless, few people are willing to tolerate any snakes on their property, especially if children frequently play in the area. In addition, some controls may be justified during the nesting season at bird sanctuaries, in duck-nesting marshes, and at fish hatcheries to prevent loss of fry.