Everyone--we mean everyone--knows that skunk spray stinks. It’s such common knowledge that you probably don’t remember learning it. You’ve always just kind of known that skunks are stinky and you should stay out of their way. And hey, there’s a reason why that particular piece of advice is so popular: it’s true. Despite the fact that everyone knows skunks stink, however, very few people seem to know why. Why would you want to know that? It’s a fair question, but we have a fair answer. Learning how and why skunks use their stinky spray is one of the best ways you can avoid it. Here’s everything you could ever want to know about skunks and their stinky spray… and then some! ‍

What is skunk spray? 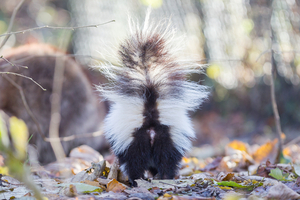 Skunk spray is actually a chemical liquid containing organic compounds called thiols. Thiols are a very simple chemical compound of one sulfur atom bonded to one hydrogen atom. The sulfur in thiols is what gives skunk spray its infamous odor. Thiol compounds attach to and modify different strings of chemicals. In the case of skunk spray, they attach to one end of a chain of carbon and hydrogen. The carbon and hydrogen chain is volatile in liquid form, so when it’s released it disperses into the air easily. When it disperses, the thiols are released in all their stinky glory, and… unfortunately, you know the rest. ‌

How do skunks spray?

Why do skunks spray?

Skunks use their spray to defend themselves. If you think skunk spray seems unbearable to us, imagine if our sense of smell was more developed. Many predators that would naturally prey on skunks like bears and coyotes rely on their smell to hunt. When skunks spray them, it’s not just unpleasant--it’s overwhelming. Skunks generally give plenty of advance warning before they spray. First, they’ll “puff up” and stomp their feet several times. If that doesn’t work, they’ll “aim” by turning to face their glands toward their target. That usually gets the message across. ‌

When do skunks spray people?

Skunks spray humans for the same reason they spray predators: because they feel threatened. This should probably go without saying, but you should never threaten a skunk. It’s a bad idea. People sometimes also inadvertently threaten skunks, however. Usually, people accidentally freak out skunks when they walk near skunk dens without realizing it. Skunks live in simple burrow-like dens that they either dig themselves or take from other animals. They like to build these dens under existing cover, to protect them from predators and the elements. Sometimes, they’ll build under porches or decks. Skunks may react to people walking over their dens defensively, especially if they’re surprised. ‍

Strictly speaking, no. Skunk spray isn’t toxic, it doesn’t transmit diseases, and it won’t burn you or harm you any other way. If the liquid spray gets in your eyes it might significantly irritate them. The smell itself has also been known to trigger nausea, though that’s hardly surprising, considering. No, ultimately skunk spray is no more-or-less than what it seems: really bad-smelling. The bad smell is more than enough to get predators to back off. ‌

How do I avoid getting sprayed by a skunk? 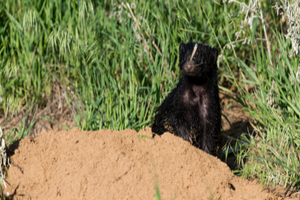 Skunks only spray when they’re surprised or threatened. If you encounter a skunk in the wild, give it a wide berth. Do not make sudden movements or walk toward it in a threatening manner. If possible, simply back away from the skunk. Skunks usually don’t want to be bothered any more than you want to bother them. Of course, this tip gets slightly more complicated when there’s a skunk living on your property. Skunks tend to act aggressively to defend their home dens, especially if they’re surprised. If you figure out there’s a skunk den on your property, give us a call immediately. Do not try to remove the skunk yourself. ‌ When it comes to skunks, it’s better to be safe than sorry--trust us. If there’s a skunk on your property, give Varment Guard a call right away. Our experts can humanely trap and exclude skunks from your property. Don’t take the risk; when you have a skunk, get in touch right away. The alternative might literally stink.
Categories:
skunks
Previous

Keeping Bats Out of Your Home
Next

Keeping Your Pets Safe from Coyotes