Few animals are as fascinating as hummingbirds, if only because they seem so different from everything else. You’re probably used to seeing sparrows and pigeons, but seeing a hummingbird is always a noteworthy experience. They’re mysterious, rare, and hard to track down. Who wouldn’t want to know more about something like that? Despite being beloved by so many, however, few homeowners seem to know much about hummingbirds. You probably know that they’re tiny and they hover around flowers, but that’s about it. We have good news: getting to know more about hummingbirds won’t ruin their mystique. In fact, they actually get more fascinating the more you know about them! Here’s everything you should know about the hummingbirds around you, including how to attract them to your home. ‌ 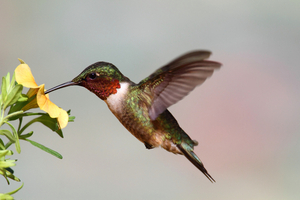 What do hummingbirds want? 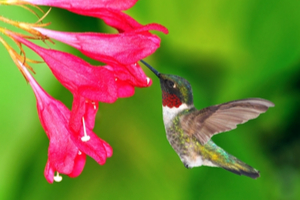 Hummingbird’s primary source of energy is flower nectar. They “drink” the nectar by hovering next to flowers and piercing them with their long, tapered becks. Once they access the nectar inside the flower, they continuously lick it up with their long, thin tongues. Hummingbirds can “lick” up nectar this way up to thirteen times in one second! Hummingbird metabolisms are so fast they have to eat around half their body weight in sugary nectar every day. As you might imagine, keeping up with such an appetite is demanding. The birds have to eat around once every ten minutes, so they’re on the lookout for nectar constantly. They also need nectar that’s fresh and that has a high sugar content. They’re attracted to budding flowers and tend to migrate with flower blossoming schedules. Hummingbirds beaks are most suited to eating out of tube-shaped buds, so they’re particularly attracted to lilies, petunias, iris, columbines, and similarly-shaped flowers. ‌

When are hummingbirds active? 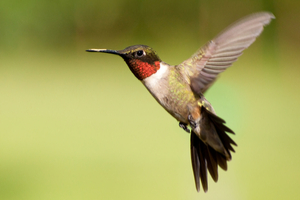 Most of the hummingbirds in the US are migratory. They fly up from Central America to breed during spring and summer, and fly back down in fall. Their exact migration timeline is determined largely by the season’s temperature. Migration generally begins around February or early March, when they fly to warm areas of the southern US. If it’s warm enough, some birds might appear in the central US by the middle of March or early April. Hummingbirds generally remain active in the central and eastern US through summer. During this period, they breed and eat nectar and insects constantly. Most hummingbirds conserve energy during the hottest period of the day and fly around in morning and evening. Hummingbirds don’t fly back south for the winter at a specific fixed time. Some birds may start the journey back as early as mid-July, while others may wait until later fall. Several factors affect migration schedule, including food availability, temperature, weather, and the age of a particular bird. ‌

How can I attract hummingbirds? 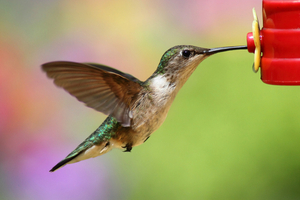 Attracting hummingbirds to your home are garden can be a fun pastime, and it’s pretty easy! Hummingbirds come to places where they can get the things they need: food, shelter, water, and places to nest. Start by planting the tube-shaped flowers they love to feed on. You could also purchase hummingbird feeders at most hardware or garden stores. Buy nectar at the store, or make your own! Replace the nectar once every two weeks, or it could get too crusty for hummingbirds to access. Hummingbirds get most of the water they need from nectar, but they like to bathe by flying through mists. Misters or sprinklers could help attract hummingbirds to your yard. Hummingbirds also prefer open areas where they can feed and make nests without being disturbed. Make places for the birds to perch around your home. Finally, minimize hummingbird disturbances. Loud noises, constant movement, and predators will scare them away before they have a chance to feed. ‌ One thing that will ensure hummingbirds never come to your home is if predators have taken up residence nearby. Hummingbirds have to be pretty wary to survive and thrive. If they’re threatened by something nearby, they’ll never come close. If you need help creating the perfect hummingbird environment, give Varment Guard a call any time. We’ll remove any unwanted varments right away, so hummingbirds can enjoy what you have to offer.
Categories:
birds
Previous

The Season of the Squirrels
Next

Why Do Rabbits Keep Choosing Your Yard?