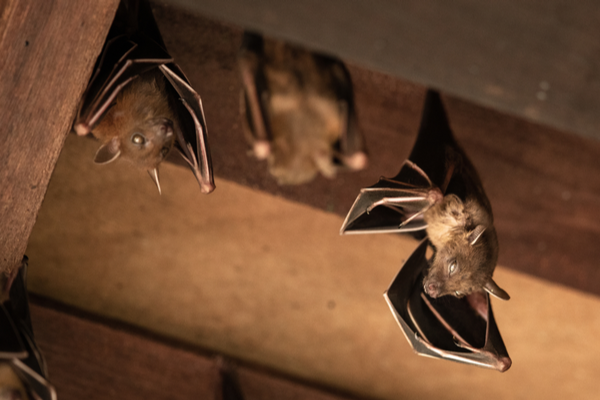 Bat infestations can be surprisingly difficult to find. Bats are very good at finding secluded hiding places in your attic or rafters. Like all pests, however, bats will leave behind telltale signs of their presence. To figure out if you have a bat infestation, you should look for these signs or contact a professional bat removal company.

Most bats infest the high, secluded areas of your home, like your rafters, attic, or crawlspaces. When you go looking for them, start high and work your way lower. As for what you’re looking for, keep an eye out for each of the following signs:

Bat droppings are also known as “guano.” Bats eat insects and don’t generally need to drink very much, so their droppings are dry and flakey. They tend to look very similar to mouse droppings: small, brown, cone-shaped, and solid. Guano may be accompanied by urine.

Guano tends to accumulate wherever bats roost, so it will pile up beneath places where they sleep. You may also find it near areas where bats enter your home such as window and door frames. During warm seasons, guano may accumulate around your porch, deck, or roof as bats fly in and out of their roosts to hunt.

It probably won’t surprise you to learn that guano smells. What might surprise it is what guano smells like. Bat waste actually produces a strong ammonia smell, particularly as it begins to decompose. The more guano accumulates and the longer it sits, the stronger the smell becomes.

Depending on the size of the infestation, you may be able to identify urine trails near roosting sites. Bats tend to urinate under while roosting or in-flight, so their urine falls some distance and splatters. Likewise, bat droppings may break apart upon dropping or sitting for some time. Look for splatter stains or dry, flakey dust-like remnants. Guano may even sparkle in the light, as it contains partially-digested insect exoskeletons.

Bats crawl into homes through small cracks and crevices around attics. They’ll find cracks near door and window frames or openings around siding or near utilities. Like rodents, bats can squeeze through remarkably small cracks to enter homes.

As bats squeeze through their openings, they leave behind a black, greasy stain from resin that accumulates on the bat’s skin. These stains will be dark-colored and may wear away at wood over time. Look for dark spots on wood near places where bats might sneak into your home, particularly around frames.

As bats struggle to squeeze through cracks and crevices, they’ll scratch nearby surfaces with their claws. Even after entering a home, bats will often scratch up rafters or walls while looking for places to roost. Bat claws are small, so look for a series of shallow, thin, and short cut marks.

Look for scratches like these near the same areas you’d look for the black stains above. Bats also tend to carve up any surfaces they roost on, so you’ll find them on rafters and pillars, too. They may also rip up insulation as they dig into the home, so look for insulation damage.

Bats are famously nocturnal, which means they sleep during the day and wake up at night. Bats generally keep to this schedule relatively closely even after they’ve infiltrated your home. During the day, bats will hunker down in roosting hiding places and sleep. At night, however, bats will start to stir… and talk.

If you have a bat infestation, you might hear bat “squeaking” in your attic at night. Bat make high-pitched squeaking or “chittering” noises to communicate and find their way around. They may also make bumping and smacking noises when they run into pillars, rafters, or walls. If you hear weird noises in your attic at night, then it’s possible bats are making them.

If you’ve noticed any of the following signs, then you probably have a bat infestation somewhere in your home. Don’t panic! Identifying that you have a bat problem is the most important step to solving it. Once you know you have bats, the next step is to get help now. The sooner, the better. 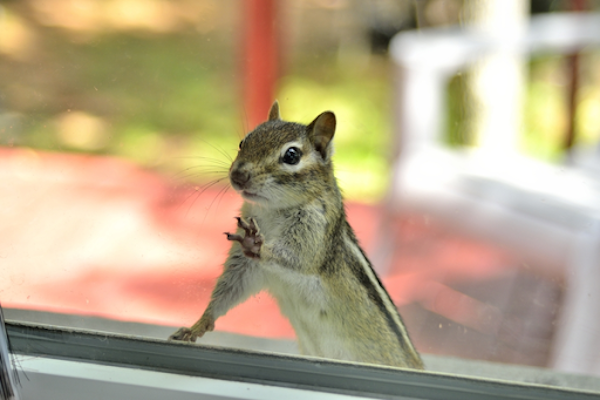 How Did That Chipmunk Get in my House?
Next

What Do Raccoons Do in Winter?