BlogWhat Kind of Bird is That? 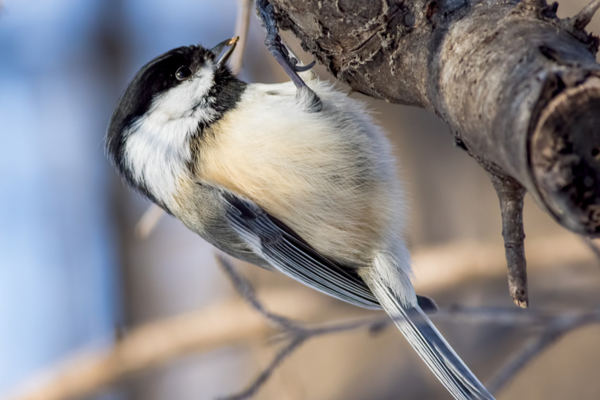 Want to know which birds are visiting your feeder? Look no further! If you live in Varment Guard’s service area, chances are the bird you’ve spotted is one of the following species. These are eight of the most common birds in the American midwest:

Feral pigeons are among the most common pest birds all over the US. Adult pigeons are 11 inches long with a wingspan of 20 to 26 inches. They’re usually bluish-grey in color with iridescent, shiny blue throat feathers. Many pigeons have black bands on their wings and black tips on their tails.

Pigeons gather in large flocks near food sources. They’re particularly attracted to food they can find on the ground. You may find them pecking birdseed that fell from your feeder. Pigeons are extremely adaptable and can live anywhere they can find food. The birds are often considered pests because flocks will build nests in and around buildings. Pigeons do not migrate.

Even if you don’t know black-capped chickadees, you could probably identify their distinctive two-tone song. Black-capped chickadees are small, plump, round birds with short necks and large heads. They measure around 4 to 6 inches long and have a 6 to 8 inch wingspan. The birds have distinctive black head feathers (hence “black-capped”) with a prominent white stripe closer to their necks.

The common (or European) starling is about twice the size of a sparrow. They measure between 8 and 10 inches long and have wingspans of 12 to 16 inches. In summer, starlings are covered in purple and green iridescent feathers. After molting in winter, they’re brown and covered in eye-catching white spots. Common starlings also have bright yellow beaks.

Starlings are considered pest birds because their large flocks are loud and they produce a lot of waste. Flocks of starlings will nest around buildings in various sheltered nooks and crannies. They’re particularly attracted to pest insects such as turfgrass larvae. Starlings do not migrate.

You can probably identify the distinctive male cardinal on sight. Cardinals measure around 8 to 9 inches long and have 10 to 12 inch wingspans. Males have vibrant red wings, tails, and crests with black faces and necks. Females are pale brown with some red feathers in their wings and tails. Both male and female cardinals have bright red-orange beaks.

Cardinals nest and forage in couples. The birds are common at bird feeders and often sit in bushes and scrubs nearby. During winter you may see flocks of up to several dozen cardinals at once. The Northern cardinal is native to the US and does not migrate.

Chimney swifts only measure 5 to 6 inches long but they have wingspans of 11 to 12 inches. Their feathers are a uniform dark grey-brown, but they have slightly lighter coloration around the throat. Chimney swift wings are notably long and curved backward.

The name “chimney swift” refers to this pest bird’s infamous habit of nesting in chimneys. Flocks of chimney swifts may build mud nests against the inner walls of unprotected chimneys, smokestacks, or boilers. In time, these nests could impede ventilation or even create fire hazards. Chimney swifts are migratory and fly to Central and South America in winter.

Measuring around 5 to 6 inches long with an 8-inch wingspan, field sparrows are only slightly larger than black-capped chickadees. Field sparrows throats and crests are pale grey, while their backs and wings are brown, black, and burnt orange-brown. A field sparrow’s crest may be fuzzy, and they tend to have long, narrow tails.

Field sparrows tend to hop on the ground to find seeds, insects, and other easy food sources. You’ll most likely encounter them on summer mornings when they sing their long, whistling song. Field sparrows migrate in winter, but their migration range is contained within the midwest and eastern US.

House sparrows look similar to field sparrows, but they’re not related! They measure 6 to 7 inches long and have a wingspan of 7½ to 10 inches. Male house sparrows have bright brown, black-tinged wings and backs and pale grey crests. Their faces, throats, and beaks are black. Female house sparrows are a dull brown color with irregular black spots and striping.

The name “house” sparrow refers to these bird’s most frustrating proclivity. House sparrows have adapted to life near human beings very well. They leave in flocks around all kinds of buildings, creating nests in sheltered nooks and crannies. These nests can occasionally cause structural or sanitation damage. House sparrows are native to North and Central America and do not migrate.

American robins are quite well-known and often quite misunderstood. Robins are the largest thrush bird in North America. They measure 8 to 11 inches long with 12 to 16-inch wingspans. Male robins have very easily-distinguished red-orange breasts, grey-brown wing feathers, and dark heads. Females have lighter but similar coloration and paler heads.

Robins are common throughout North America and can live virtually anywhere, including neighborhoods. They eat a wide variety of earthworms, grass, seeds, insects, and fruits. They’re quite common around yards and feeders. Robins actually breed in Canada during summer and fly south to North America in the fall.

While this list covers many of the most common birds you’ll see this fall, it’s by no means exhaustive. If your bird isn’t on this list, keep looking for it!

If you’re struggling with too many of any of the following birds, get in touch with Varment Guard any time. Our bird experts can remove nests and exclude birds from your property safely, effectively, and humanely.

What is a Groundhog? [Video]
Next