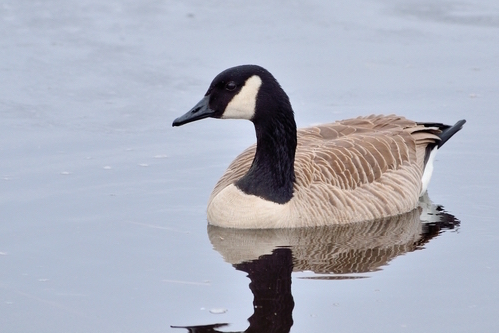 Canada geese are not classified as pest birds and are afforded protection by Federal & State agencies. Nonetheless, Canada Geese are increasingly becoming the scourge of suburbia as their numbers have grown in the past decade from only a few thousand to hundreds of thousands of these birds. In fact, the familiar V shaped squadron of honking geese heading south is becoming a rare sight. Country Clubs and business parks offer pristinely manicured lawns and ponds providing an ideal habitat and effectively modifying their migration cycle. Geese are very opportunistic and easily exploit these ideal habitats.

In the past, Canada geese inhabited marshes and rural lakes that provided them with nutritious aquatic vegetation on which to feed, as well as open spaces to rear their young. More recently, the construction of man-made lakes and ponds in residential communities, golf courses, industrial parks and various urbanized settings has created many new artificial habitats attractive to Canada geese as resting, feeding and breeding sites. The practice of planting these areas with ornamentals that are suitable to geese as food, and the inclination of many individuals to feed the geese with birdseed, corn and bread have contributed to a shift in the seasonal behavior patterns of these birds. The increased availability of harborage and food now encourages populations of Canada geese to delay or abandon their migration. They remain and propagate in attractive artificial environments to the annoyance and detriment of the human population. Furthermore, their federal protection under the Migratory Bird Treaty Act1 has allowed these birds to increase in numbers to pestiferous proportions.

Canada geese are federally protected under the Migratory Bird Treaty Act, MBTA (16 USC.703-711) and can be taken only with a permit issued by the US Fish and Wildlife Service and state wildlife agency (i.e., when other control methods have been attempted to no avail).

The ubiquitous Canada geese make themselves unwelcome as a result of their destruction of grain crops, ornamental plantings and littering of the ground and pavement with their droppings wherever they frequent. They have become a hazard around airports to aircraft taking off and landing, as well as on roadways to motor vehicles. The protective nature of nesting geese make them a nuisance as they attack and chase persons (particularly small children) who pass too near the nesting sites.

HOW TO GET RID OF CANADIAN GEESE

Perhaps the most important cultural measure that could be implemented to assist in controlling Canada geese is to educate the public about the consequences of feeding these nuisance birds. With little or no available food, the attractiveness of any given resting site would diminish. This measure would also necessitate choosing inedible ornamental plants with which to landscape around artificial lakes and ponds.

Our trained chase dogs can be employed to frighten away geese and prevent them from resting, feeding and nesting in typically problematic areas. 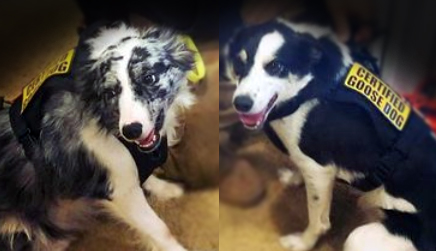 Visual scare devices (based on predator similarity or reflected sunlight and movement) have been demonstrated to have at least a short-term deterrent effect on Canada geese. Sound emission devices, particularly those which broadcast the alarm calls typical of Canada geese, have demonstrated a degree of success in frightening these birds from problematic aggregation and feeding sites. A class IIIB , battery-powered (helium-neon or diode) laser gun (i.e., Avian DissuaderTM) has proved effective for frightening flocks of geese and ducks away from resting sites around lakes, ponds and on lawns. When used at dusk and early dawn, the movement of the laser light spot on the ground and water near the waterfowl causes them to take flight or move quickly to another area. The resident geese and ducks usually move to another location entirely after 3 to 5 nights of exposure to the laser activity.

Breeding disruption. Goose eggs can be rendered non-viable by vigorous shaking or by using a device which destroys the embryo with no apparent damage to the shell except for a tiny penetration hole. Affected eggs should be replaced in nests to prevent female geese from producing more eggs for the duration of the season.

We can rid you of any bird problems safely and efficiently!

A tight grid-work pattern or back and forth parallel pattern, utilizing stainless steel wire or monofilament strands, can be suspended over bodies of water to be protected from landing geese. Alternatively, complete enclosure of problem areas and structures to be protected can be achieved using bird netting or wire mesh.

Canada geese, during molting season, can be herded into a holding pen using a walk-in funnel-trapping arrangement of wire fencing or netting. The geese may then be relocated to a prearranged release site. A federal permit is required to live-trap and relocate/removing Canada geese (as per 50 CFR 21.41a).

Application of the non-toxic chemical (taste) repellents methyl anthranilate and methyl 2- aminobenzoate to lawns and low vegetation where Canada geese aggregate and feed will render those areas inedible and undesirable to them.

The avicide DRC-1339, (3-chloro-p-toluidine hydrochloride) can be used in special situations to control Canada geese but only under the supervision of an USDA-APHIS-WS agent, and with a special permit.

Geese can cause damage to agricultural crops year-round, either by trampling or consumption. Aesthetic damage to suburban lawns, golf courses, office parks playgrounds contribute to extensive maintenance costs each year. Geese are also a health hazard. They foul reservoirs and ponds. Geese are also one of the main birds involved in airline bird strikes worldwide.

Nesting sites are typically near water with protective vegetation in close proximity. Planter boxes on high rise office building balconies in campus like settings are quickly becoming a nesting site of choice. Geese are extremely aggressive, posting sentinels at nesting and grazing sites. Defense of nests can many times result in injury to people or pets who venture too close.

Female geese usually lay one egg every other day during the 25 day spring mating season. The nest is abandoned a few days after hatching. Canada geese are mates for life, but will re-mate upon the death of their mate.

Non-migratory or residential geese, once established, prefer feeding at the nesting site, but will often fly long distances to and from favorite feeding grounds. Some feeding may occur during moonlit nights.