BlogThe Season of the Squirrels

Summer’s winding down, which means fall is right around the corner. We might still be in the “denial” phase, but nature sure isn’t. Around this time every year, all kinds of wildlife kick into overdrive to prepare for their winter. As you’re no doubt already aware, no animal does this quite like squirrels. The small, quick mammals are considered nature’s busybodies for a reason. Every year, they launch into a legendary proactive winter preparation mode. And it all starts right about now. If you feel like you’ve been seeing more squirrels around your property than usual, it’s not your imagination. Here’s what those bushy-tailed busybodies are up to this year, and how it could affect you. ‌ 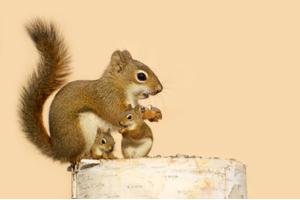 Squirrels have two litters every year. The first are born between February and April. The second are usually born between August and September. After mating, squirrels gestate for about 40 days. While the mother is pregnant, she’ll eat more than usual and also begin stockpiling food for her babies. Most live and nest independently, though ground squirrels sometimes nest communally. Squirrels build their nests, or “dreys” by layering leaves together on tree branches or nooks. Baby squirrels are born helpless, like other mammal babies. Mothers raise their offspring independently by weaning them and protecting them while they live in the nest. Babies open their eyes after about four weeks, and they’re ready to live independently at 10 weeks. If you see a squirrel gathering leaves or climbing tall trees this summer, they’re probably a new mom! ‌ 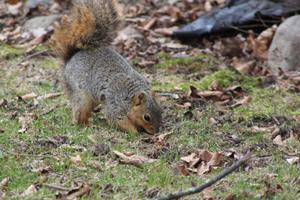 Squirrels start stockpiling food for the winter early. They use a process called “scatter-hoarding,” which means they stash their food in several scattered hordes. These hordes are usually near their nests and easily accessible. Scatter-hoarders like Gray and Fox squirrels also “cache” their hordes by burying them about an inch underground. Some even create fake buried caches, just to throw off other foragers that are after their food. Squirrels hoard a wide variety of foods. They gather seeds, nuts, tree bark, leaves, pinecones, buds, acorns, fungi, fruit, insects, and more. When it’s time to eat, they use their powerful sense of smell to relocate their hordes. Some may go even further. A recent study concluded that some species may use mnemonic strategies like “spatial chunking” (organizing their hordes according to content) to remember where everything is. ‌ 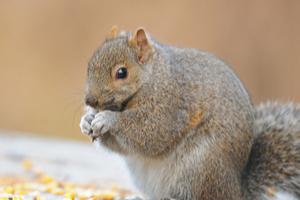 When squirrels aren’t stockpiling food, it’s probably because they’re eating it. Squirrels prepare for winter by fattening themselves up. They store up extra layers of fat so that when food is scarce during the winter they don’t starve. Many start bulking up for the winter very early. When they start bulking up, the foragers look for consistent, abundant sources of food. Many species are particularly fond of bird seed, as many frustrated owners of bird feeders can attest. Squirrels also tend to eat for longer when they’re getting ready for winter. In fact, it might look like they never stop eating. Adults will graze pretty much all day, stopping only to sleep or horde. Most species are especially active in mornings and evenings during late summer when they can move around most easily. ‌ 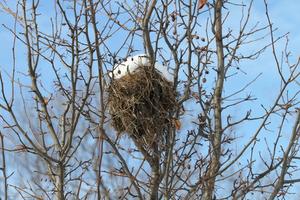 Contrary to popular belief, most squirrels don’t hibernate. Ground squirrels are the only type of squirrel capable of long term hibernation. Tree squirrels (like the common Gray, Red, and Fox squirrels) remain active all year long. That doesn’t mean they can stand the cold of winter, however. If they want to survive winter, these squirrels need a nest that will keep them warm through the season. Squirrels build their winter nests in all kinds of different places. Some fill out their existing dreys, adding more leaves, twigs, and other materials. Others move into tree cavities or other openings originally created by other animals. Unfortunately, many also decide that your home would be a great place for a nest. Squirrels frequently infiltrate attics in order to make nests and stay warm for the winter. Sometimes, multiple critters will move into the same attic! ‌ Squirrels are so proactive that they tend to make the rest of us look bad. Summer’s not even over, and they’re already in full-on preparation mode. It’s admirable… and a little annoying. If you want to be as prepared they are this year, you should consider preparing! If you’re worried that bushy-tailed babies are eying up your attic as a winter haven, give Varment Guard a call. We’ll help you feel as prepared as even the fattest, happiest squirrel.
Categories:
squirrels
Previous

How to Spot Shy Animals
Next